Quality silage is all in the detail

For Steve and Tom Cox of Manor Farm in Staffordshire, attention to detail is the key to producing good quality winter forage and maintaining high yields from their high input, high output dairy herd. 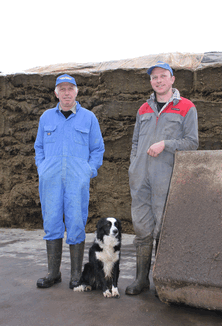 Steve Cox and his family, farm 870 acres at Marston near Stafford, where they run a herd of 500 milking cows and 100 Suffolk ewes.

In 2008 they purchased 267 acres, built a new cubicle shed and installed a 40-point rotary parlour to enable them to expand their herd from 300 to 500 cows.  The herd is currently averaging 11,000 litres per lactation from a high input, high output system, with milk being sold on a manufacturing contract.

"We are paid on butterfat and protein," Steve Cox explains, "but it’s litres in the tank that pays the bills, so we push the herd for yield.   In order to maximise milk production," Steve and Tom considered taking the herd to 600 cows, but at those numbers realised they’d have struggled to keep on top of the volume of slurry and dirty water generated. "Instead we decided to stay at 500 cows and to make sure we focus our attention on getting everything absolutely right."

Of the 870 acres they farm, the Coxes put 550 acres to permanent pasture and grass silage, with an additional 150 acres of maize silage and 170 acres of cereals. "During the winter we feed the dairy herd a diet of grass and maize silage, with wheat fed as either whole-crop or milled feed depending on the quality of the silage."

"We couldn’t produce the volume of milk we are currently yielding from grass alone, so we have to substitute the cows’ basic diet by buying in extra feed. It makes no sense to go to all that expense if the silage we produce ourselves isn’t of the best quality."

Last year’s testing weather made silage making a challenging prospect, but Steve and Tom stayed with a proven technique to ensure the grass silage they are currently feeding has the same nutritional value as the day the grass was cut.

"Putting silage into clamps is essentially a wastage limitation exercise, Steve remarks. There’s no reason why grass silage shouldn’t have the same nutritional value when it’s eaten as it did on the day the grass was brought into the clamp."

"We went back to doing all our own grass silaging in 2011 so that we can dictate when to cut the grass and when to bring the wilted crop in.  Having our own kit means we can go when we want, instead of waiting for a contractor to be available."

Prior to silaging, Steve and his team spend time making sure the empty silage pits are as clean and pest-free as possible. They then line the walls of the clamps with high quality oxygen proof sheeting, which is folded over the top of the clamp once full. 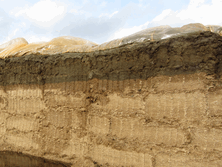 Manor Farm has an array of silage clamps, some of which are earth-lined and others which are constructed of concrete panels. "We use side sheeting on all the clamps as a matter of course to make sure no air can get into the silage from the sides or shoulders of the clamp," Steve explains.

Despite owning a self-propelled forage harvester, Steve insists that they chop a maximum of 80 acres of grass per day. "At that speed we can concentrate on making good quality silage," he explains.

"There’s a skill to building up a clamp properly," Tom adds. "Every job in the silage making process is important, but the man operating the buck-rake needs to be particularly vigilant. It’s his job to roll the clamp evenly and thoroughly and to make sure there are no air pockets."

Once finished for the day, each clamp is sheeted up straight away. "We never leave the clamp open overnight and always use new sheeting," Tom continues. "It’s tempting to cut corners at this stage, but even leaving the clamp open for a few hours overnight can cause some surface spoilage." 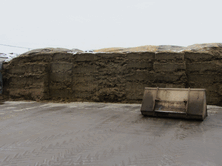 When full, each clamp is sealed with a top layer of Silostop Orange oxygen barrier sheeting followed by a layer of conventional black plastic for extra protection and a layer of inter-touching tyres. "The oxygen barrier sheet has reduced the amount of spoiled silage to almost zero," Steve adds. "It costs around £200 more per roll than traditional black plastic, but for that we save a huge amount of silage that would otherwise by spoiled due to air ingress into the clamp. At around £40 per tonne to buy-in, it’s more than worth our while to make sure every tonne of silage we make is kept in perfect condition."

Silostop is well worth the extra cost compared with other sheets

The Coxes have been using Silostop oxygen barrier sheeting for the past six years, prior to which Steve reckons he used to lose up to 10% of the silage in each clamp as a result of aerobic spoilage. It was as if the sheeting we were using was full of holes. 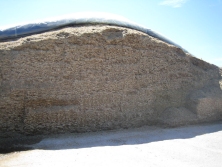 As well as the obvious spoilage at the top of the clamp, there would also be a layer of silage further down that looked fine, but which was of an inferior quality. The yields we were getting testified as much with the poor quality silage taking its toll on cow performance.

"Now we only get a very small amount of wastage, with the cows benefitting from a more consistent quality of winter forage."

According to Jennifer Hitchman, UK Sales Manager for Silostop, conventional black plastic sheeting can allow up to 400cm3 of oxygen to pass through one square metre of sheeting in 24 hours. "Under these aerobic conditions, yeasts, moulds and clostridial spores will cause significant spoilage in the upper layers of the silage," she states. By contrast, a higher grade of oxygen barrier sheeting will allow just 3cm3 of oxygen through, resulting in far less wastage and a much better quality of silage. 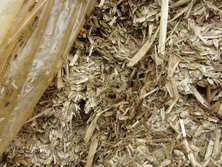 "This provides a more stable environment for fermentation and can reduce dry matter losses in the top 40cm of silage by as much as 27%," Ms Hitchman adds. "That can give significant cost savings by avoiding the need to purchase replacement silage and reducing reliance on supplementary feeds. Attention to detail is Steve’s forte as a farmer, especially when it comes to making quality silage. He thrives on the challenge of getting the most from his grassland and his herd, and the way he manages his silage clamps is indicative of the level of details he works to."

Attention to Detail is everything with silage making

Once each clamp has been opened, the attention to detail that Steve and Tom pride themselves on continues. "We like to make sure the clamp face is kept as tidy as possible to avoid any ongoing wastage," Steve explains. 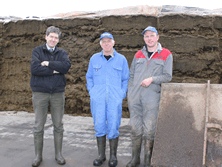 "Any loose silage at the foot of the clamp face will heat up and cause mould spores to spread so we take a few extra minutes to sweep up after the feeder wagon has been loaded. We also make sure we recycle the old plastic and replace it with fresh sheets at the start of each season. That way we know the sheeting will be clean and hole-free. It’s also easier and quicker than trying to struggle with dirty and torn sheets."

"It’s a constant battle to keep everywhere clean and tidy, but in our opinion it’s the little things that make the big differences, and if everything is done just as it should be, most problems are avoidable."