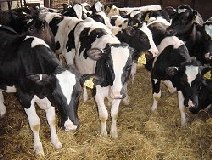 Calves are the future of the dairy herd, their feeding and management should reflect this fact. Holsteins need to be managed correctly from birth in to reach their genetic potential. It is impossible to make up lost ground later on. It is cheaper to grow heifers well and calve them earlier. The sooner they are contributing to the bulk tank instead of simply taking up shed space the better.

Often the reasons for culling early can be linked back to the quality of heifer rearing. For a 200 cow herd with a 25% replacement rate, calving heifers at 24 months rather than at 30 months of age would typically reduce costs by around £10,000 - £12,000.

Whether the actual cost of rearing a replacement heifer is lower or higher than the cost of a purchased heifer dictates whether or not the heifer rearing enterprise has made a negative or positive gross margin. The difference in margin can easily vary by £25,000 between individual 200 cow farms, depending on growth rates and the number of calves that fail to make it into the milking herd

Research conducted by DairyCo in the UK showed that heifers calving at a younger age needed less assistance at calving, would live longer and have a much higher lifetime yield. 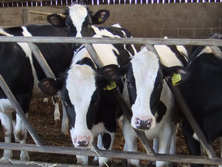 Heifers should be grown rapidly to calve at 85% - 90% of mature body weight or at least 600kg at 24 months old. In order to do this they need to grow without any growth checks and reach 50% of their adult weight by 12 months of age.

From birth to calving they will need to average  a liveweight gain of 0.8 kg/day. Calving under-weight heifers is a very expensive option, which will limit lifetime milk yields and reduce profits.

Feeding the Young Heifer (12 weeks - Puberty) - The aim should be to achieve fast efficient growth from birth to puberty. Grow frame not fat. Feeding plenty of quality protein e.g. soya along with a generous supply of energy will result in large framed heifers, able to be calved at an earlier age. The rumen is not fully functional until around 9 months of age. Until then calves cannot fully utilise forage or utilize soluble nitrogen or degradable protein from grass silage. In fact there is a high energy cost associated with excreting excess nitrogen as urea when excess degradable protein is fed. 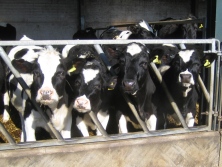 For heifers less than 6 months old 3kg - 4kg of a high quality concentrate should be fed with ad lib straw. Under nutrition during the first 12 months restricts the growth of the pelvis. This is a common problem which when accompanied with over conditioning and laying down fat later on will result in difficult calvings. Heifers should be served when they reach a height of 50 inches at the withers at around 13 - 15 months old. Frame size is more important than live weight. Avoid delayed service once heifers have reached target size.

Feeding the In-Calf Heifer - Aim to grow rapidly on high quality forage, but avoid over-conditioning by maintaining a good protein level in the diet and restricting the energy density of the diet where necessary. Ensure that mineral supplementation is adequate throughout and introduce to the dry cow or transition groups at least 3 - 4 weeks before calving. 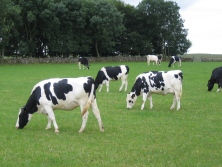 Accelerating growth of heifers offers tremendous scope to increase the performance and profitability of dairy herds in the UK. A high proportion on the energy requirement of a growing heifer is for maintenance this explains why heifers grown faster to calve earlier are actually cheaper to rear.

A beef animal grown at 1.25kg live weight gain per day would eat twice as much feed than an animal grown at 0.75kg per day to reach a given weight. The same principle applies to dairy heifers though we would feed more protein and less energy to grow frame rather than fat with a heifer.

It costs over £1.00 per day to keep a heifer whether she is growing a little or a lot. Reducing the age of calving by 2 months has been estimated to be worth over £200 per heifer reared. Increasing the size of the heifer at calving offers even greater benefits in terms of increased milk yields as well as reduced metabolic problems during the subsequent lactation. It is also far more efficient to grow heifers before they calve than during their first lactation.

Accelerated Growth involves using specially formulated diets in order to obtain a larger framed heifer rather than an over conditioned or fat heifer suffering from 'fatty udder'. RWN AGP Coarse is a specialist coarse calf and heifer supplement designed specifically as part of an accelerated growth programme for dairy heifers. The emphasis being to increase frame size rather than to lay down body fat. 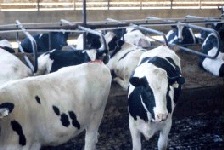 Dry Feeds - We supply a full range of quality coarse calf mixes, calf pellets and rearing nuts and rearing blends available both in bags and in bulk designed to suit a wide range of rearing systems. We also specialise in providing molassed buckets and heifer rearing minerals formulated specifically to meet the requirements of the individual farms own forage.

If heifers are to achieve optimum growth rates it is essential that they receive an adequate supply of nutrients throughout their rearing period. Other supplements such as Biocell Yeast and Ostrea are also recommended to both improve feed efficiency and increase growth rates. Failure to supplement heifers at grass all too often results in failure to achieve their full potential.