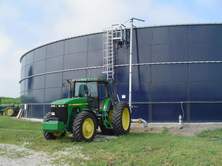 Slurry-Ultra is a biological slurry additive treatment which has the ability to rapidly break down organic matter particle in order to produce a homogeneous, easy to handle, free flowing slurry. Additionally Slurry-Ultra substantially reduces nitrogen losses to the atmosphere.

Research and feedback from farmers shows numerous benefits of treating slurry with an additive.  With rising costs and a growing awareness of climate change farmers are become increasingly eager to find ways to reduce their fertiliser bills without negatively impacting on performance.

Livestock slurries are a valuable source of fertiliser and organic matter.

They do however come with a number of problems. Organic matter is liable to settle out forming a solid sediment which is difficult to move or to float to the top of the store forming a solid crust. This makes handling very costly and problematic.

Prolonged stirring, difficult pumping and blockages are costly in terms of fuel, machinery cost and man hours. Crust build up and blockages in channels cause major handling problems for slurry. Often slurry in the store is highly variable resulting in inconsistent crop yields.

Fertiliser nutrient losses from livestock slurries can be extremely high. Nitrogen in slurry is typically in the form of ammonia (NH3) and ammonium salts (NH4). Ammonia is easily volatilised to the atmosphere as a gas. Odour can be a serious issue on some farms especially near residential areas.

Trials have shown that nitrogen losses during storage of slurry can range from 1% to over 50%. This is mainly due to ammonia volatalisation and increases the longer the slurry is stored. Over 50% of the nitrogen in slurry is often in the form of ammonia.

Studies by AFBI Northern Ireland indicate that if slurry is spread using a splash plate, 80% - 100% of the available nitrogen can be lost. Application by trailing shoe can reduce this by 30% - 60%. This is still a substantial amount of valuable nitrogen to lose.

Slurry additive treatment can convert a high proportion of the nitrogen held as ammonia into microbial protein which will then not volatilise and will not be lost to the atmosphere.

Nitrogen losses from slurry represent a very high cost to the farmer and make a very significant contribution to GHG emissions or carbon footprint from UK agriculture. 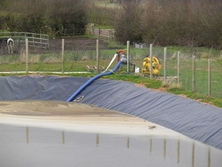 Slurry-Ultra uses bacteria and enzymes to liquefy and deodorise slurry in livestock systems. The inoculant bacteria are selected naturally occurring strains of bacillus species which are found naturally in soil.

These 'bugs' multiply very rapidly in fresh slurry and continue working over several months. Inoculating the slurry store with these bugs is a very effective means of converting the nitrogen in the store from ammonia which is to a large extent lost to the atmosphere, to a stable form.

The enzymes in Slurry-Ultra work to steadily break down and separate fibre particles in the slurry. As the bugs grow and multiply they breakdown particles of organic matter which would form sediment or crust on the surface. As they grow they take up ammonia and convert it to microbial protein.

Nitrogen in microbial 'bug' protein remains in the slurry and is not lost during storage or spreading. This protein will be steadily broken down in the soil producing a slow release of available nitrogen, and other nutrients such as available phosphorous and sulphur. 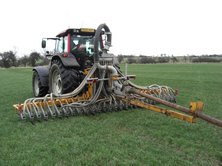 This biological slurry treatment is highly beneficial. Slurry-Ultra will work both in aerobic and in anaerobic conditions. Over a number of weeks the slurry becomes much more liquid and free flowing. Much easier to stir, pump to apply and is much more homogenous.

When spread the Nitrogen is in an ideal form to feed the soil microbes. This in turn leads to improved soil health, less scorching of the sward and better regrowth.

Odour is reduced resulting in less odour in sheds over slats. Less odour from outdoor stores and less odour at spreading time. Nutrients are much more evenly applied to crops, Due to improved consistency, treated slurry tends to wash into the ground quicker with fewer residues left behind on the surface and with less contamination of growing crops. 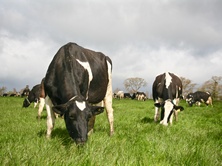 This is extremely important in dairy and cattle grazing systems. When treating with Slurry-Ultra due to reduced grass taint there is much less of a problem with grazing rejection. Treated slurry can be applied in multi-cut silage systems with reduced risk of slurry contamination affecting silage fermentation.

Costs of fuel, machinery and man hours are greatly reduced during stirring, slurry handling and application.

There is rarely need to add water to improve handling when using Slurry-Ultra so volumes are reduced in store and during application with considerable cost savings. When using umbilical systems, treated slurry can be pumped further and faster than untreated slurry.

Due to the large savings in nutrient losses, the costs associated with artificial fertilisers can be reduced. In view of the current increases in cost of fuel, machinery and fertiliser treating slurry with Slurry-Ultra is highly cost effective 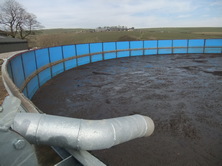 Return on investment is likely to be in excess of 5 : 1 and possibly much higher with current UK farm input costs.

All in all this is a great way of reducing GHG emissions and the carbon footprint of UK agriculture.

Add Slurry-Ultra to the store based on the volume of the store. One application in this way is often sufficient. Add to the empty store as soon as there is sufficient slurry to agitate. Distribute as well as possible to encourage best performance. Agitation is an ideal way to ensure the bacteria are well spread. 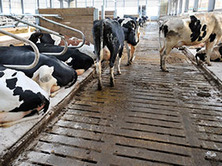 Where cows are housed on slats, mix the Slurry-Ultra in plenty of water and pour through the slats, if possible create a pool on top of the crust.

For best results stir lightly every 4-5 weeks during the season. This ensures that fresh slurry added to the store continues to be inoculated with bugs from the treated slurry in the store. It is also a good opportunity to top up the additive where appropriate. Stir regularly and you will be rewarded with less work at spreading time.

Slurry-Ultra is available either in it's standard form for conventional livestock or as Slurry-Ultra (Organic) for use in organic farming systems. 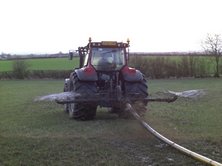 Treating Slurry has the following benefits:

Slurry-Ultra an aid to good management in all slurry systems

Treatment of livestock slurry with Slurry-Ultra will reduce crusting and create a homogenous and easy to handle free flowing liquid slurry which is much easier to pump and spread.