The construction of three new silage clamps and a careful pit-filling and sheeting regime have helped Jonathon Jackson to reduce maize and grass silage wastage at Longpools Farm near Hinstock in Shropshire. 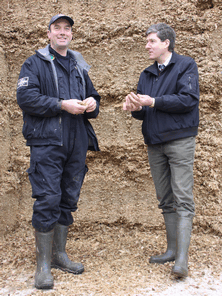 Jonathon Jackson milks 230 cows on his 450 acre farm in Shropshire, where he grows 80 acres of first ley grass and 24 acres of lucerne for silage as well as 90 acres of maize silage and 80 acres of arable crops.

In 2012 he replaced one large wooden-sided silage pit with three concrete-panel clamps.  “We needed to upgrade the farm’s infrastructure to enable the business to move forward, and knew that investing in new silage clamps would help us to reduce spoilage and improve the quality of our winter forage,” Jonathon explains.

“The new clamps allow us to store each cut of silage separately, and their concrete panel construction lets us roll each batch of silage much more thoroughly,” he adds.

“The old pit gave us a lot of spoilage at the clamp shoulders because we couldn’t rolls the sides properly.  The new clamps have got rid of that problem as we are now able to roll right up to the pit walls.  The concrete panels are also more airtight than the old wooden-sided clamp which means the entire crop ferments with better consistency.” 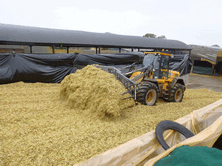 In order to preserve the nutritional value of each cut of silage, Jonathon uses a tried and tested system to fill the clamps and seal the ensiled crops using Silostop.  “Any variation in silage quality will affect cow performance and milk yields,” Jonathon explains, “so we work hard to produce silage that has the same nutritional value as the day the grass or maize was harvested."

“The key for us is to roll the silage as much as possible and to seal the clamp as soon as the last trailer-load has been brought in,” he adds.  “When the final trailer has been tipped we spend a couple of hours rolling the clamp with two tractors to expel any pockets of air.”

It then takes Jonathon and his team about two hours to seal each clamp properly.  “The time and effort involved is nothing compared to the potential losses if the job isn’t done properly,” he remarks.  “If we finish silaging late at night, we’ll tack the top sheets on in the evening and seal the pit properly the next morning, making sure we create the right environment for anaerobic fermentation to take place.” 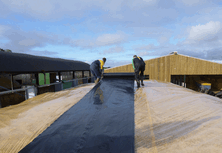 Vital to Jonathon’s clamp sealing system is the use of a Silostop oxygen barrier sheet to ensure the clamp is as airtight as possible.  “We started using a Silostop oxygen proof sheet six years ago and have seen a significant improvement in silage consistency as well as a large reduction in wastage and spoilage,” he explains.

“We drape a single layer of Silostop sheeting over the inside walls of the clamp and cover the top with the same material.  This is then covered with a sheet of conventional black plastic and a sheet of fine-mesh netting to prevent damage from starlings and rodents.”

The top of the silage pit is then completely covered with touching lorry tyre sidewalls with gravel bags around the edges to create an even pressure across surface of the clamp. 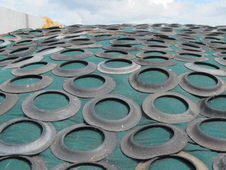 “Before we started using an oxygen barrier sheet we’d regularly see a 12 inch band of spoiled silage at the top of the clamp face which would have to be thrown away.  Below that, the next layer of silage looked OK, but it was always of a lower nutritional value and full of mycotoxins.”

The discarded and wasted silage from the farm’s old silage pit represented a significant monetary loss for the business.  “At a conservative price of £40/tonne, we were losing several thousands of pounds worth of silage each year,” Jonathon calculated.

“Silostop oxygen barrier sheeting is around £200 more expensive per roll compared to traditional black plastic, but in our eyes it’s a worthwhile investment.  After all, for every £200 we spend, we are saving a much larger equivalent value in silage that doesn’t have to be thrown away.” 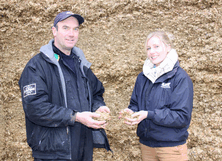 According to Jennifer Hitchman, UK Sales Manager for Silostop, conventional black plastic sheeting can allow up to 400cm3 of oxygen to pass through one square metre of sheeting in 24 hours.  “Under these aerobic conditions, yeasts, moulds and clostridial spores will cause significant spoilage in the upper layers of the silage,” Ms Hitchman states. By contrast, a higher grade of oxygen barrier sheeting will allow just 3cm3 of oxygen through, resulting in far less wastage and a much better quality of silage.

“This provides a much more stable environment for fermentation and can reduce dry matter losses in the top 40cm by as much as 27%,” Ms Hitchman adds.  “That can give significant cost savings for most dairy farms by avoiding the need to purchase replacement silage and reducing reliance on supplementary feeds.” 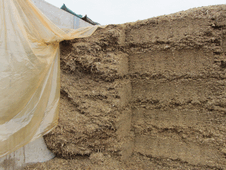 As each clamp is emptied, Mr Jackson sends the used sheets away to be recycled.  “Our philosophy is simple; if we’re going to go to the trouble of making the best silage possible, it makes sense to do the job properly.  For us that means rolling and sealing the clamp as tightly as possible and using new sheeting each year.

It’s also cleaner, quicker and easier to use a new sheet rather than struggling with old sheets that might have the odd hole here or there.”