Making the Most of Maize

Making the Most of Maize

How Much of the vast potential energy for milk in a forage maize crop eludes us?

A heavy crop of maize in the field represents a massive amount of dry matter yield, energy and starch. Valuable feed for cows both to produce additional milk and to reduce purchased feed bills. With both  margins and cash on dairy farms extremely tight it is important to look at how we can make the most of this valuable crop. The proportion of all that potential available energy actually utilised varies enormously from farm to farm. So how can we capture and utilise all that nutrition most effectively with minimum losses? 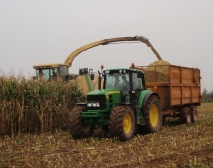 Harvesting maize in marginal areas of the UK is always a compromise between waiting for the crop to fully ripen and getting the field clear before the weather deteriorates. The massive leaf canopy of a big healthy crop of maize can add additional dry matter yield and starch to the crop very rapidly. In the right conditions an extra 3 weeks can easily add 30% to the overall crop DM yield and more than double the starch yield.

Harvesting maize early reduces DM yield, potential feed value and increases the cost per tonne of dry matter of the crop. Wait until the grain has firmed to a hard cheese stage and if the leaves are still green and the weather is good let the crop grow on. Aim to harvest DM of 28-33%. Once the bottom third of the leaves have dried down or the crop is frosted harvest within 5 days. Longer than this will allow the dead leaves to become heavily contaminated with yeasts and moulds resulting in aerobic spoilage on the clamp, mycotoxins and heating in the TMR. 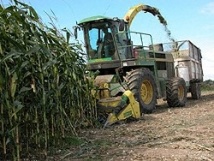 Chopping forage maize relatively short will tend to aid consolidation, increase clamp density, improve fermentation characteristics, and increase aerobic stability, dry matter intakes and animal performance. One of the biggest causes of waste on maize is overfilling of clamps. Shorter chopping and additional rolling (roll thin layers, with heavy machines and narrow tyres) to improve consolidation not only gets more maize into the clamp, but also can reduce dry matter losses by as much as 10%. If there isn’t room in the clamp, then make an additional long narrow roll over, field clamp for use in the summer months. Steep slopes guarantee poor consolidation. Avoid putting clamps together with any shoulders, ramps or slopes of greater than 30o. 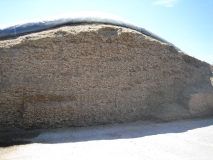 An anaerobic fermentation can only take place in the absence of air. Inadequate sealing is the main cause of top, side and shoulder waste on pits. Any oxygen present will delay fermentation allowing growth of yeasts and moulds, loss of nutrients and breakdown of proteins during the early part of the fermentation. Poor fermentation characteristics in the top metre of a clamp and spoilage can result in heating in the TMR, reduced dry matter intakes and especially where mycotoxins are present can seriously affect both the milk yields and cow health.

Additional time spent and attention to detail in making clamps airtight will yield big rewards. Most clamps lose at least an extra 10% of the material in the top metre compared with the bottom metre of the clamp. Much of these losses are avoidable by better sealing. The problem is that both black plastic and clear polythene film will transmit significant amounts of oxygen even when edges are fully sealed, typically 2 litres of air go through each m2 of sheet every day.

Fortunately there is one clamp sealing system available that will give close to 100% exclusion of oxygen. The Oxygen Barrier Clamp Sealing System  has been proven to reduce clamp losses at a number of EU, UK and USA independent forage research centres.

The system is based on Low Transmission Oxygen Barrier Film, Anti-UV Protective Nets and Gravel Bags. The film can also be used in conjunction with black plastic sheet, lorry tyre sidewalls and tyres.

Other clear films on the market, which are made of polythene, do not offer this protection so always use genuine Silostop film. This new technology is now well proven and ought to be in use as the standard method of sealing all UK silage clamps.

Maize silage is an ideal feed providing energy in the form of starches and sugars, it is unfortunately prone to heating and spoilage if not well preserved.

The speed of fermentation in maize is fast compared to grass, which buffers the fermentation and is usually lower in dry matter content compared to maize. This means that less acid needs to be produced in maize silage to reach a stable level. However there is still, room for improvement. Bacteria naturally present on the crop will produce a fermentation but with unnecessary energy and dry matter losses.

Selected strains of elite bacteria in inoculant based maize additives produce lactic acid, very efficiently using less sugars to ferment the silage and reducing DM losses compared with untreated silage. The bacteria in Ultra-Sile Maize, Ultra-Sile Arable and Ultra-Sile HiDri additives are able to rapidly drop the pH of the maize silage to a stable level whilst producing a range of organic acids and inhibit the growth of spoilage organisms, which cause heating and mould growth. Ultra-Sile Maize and Ultra-Sile Arable are able to reduce fermentation losses and provide more stable silage with improved aerobic stability of the clamp after opening. The result is more maize to feed out with better feed value.

The most obvious losses from maize silage are the losses associated with heat generated by yeast growth. Yeasts are not visible to the eye but the heat generated as they multiply is very obvious to the touch, temperatures of over 30oC are common in poorly preserved maize silage. The graph below shows the effect of heating in maize silage over 5 days; the untreated silage was stable for less than one day and the treated silage stable for almost 5 days.

The nutrients in maize silage are an ideal feed source for moulds to flourish when air is available. When moulds are under stress or competition they produce poisonous substances, these substances are mycotoxins. Mycotoxins are unique to each mould and have a wide range of impacts upon stock, some are un-harmful others are extremely dangerous; the range of symptoms is very wide. The impact on the cow’s immune system is also very debilitating leading to non-direct symptoms. By reducing the level of moulds in silage Ultra-Sile Maize is able to reduce the potential for mycotoxins.

Chemical preservatives (sorbates, sulphites, benzoates, nitrites and acids) are by nature expensive by comparison with biological inoculants. Due to the high cost the amounts of active ingredient used are usually marginal. In good conditions they work well but in difficult conditions they often do not have sufficient active ingredient to stop spoilage organisms from growing.

Biological products such as Ultra-Sile Maize additive are self-controlling and will continue to produce organic acids until the silage has stabilised. As a consequence these products even under more difficult conditions tend to offer a more effective solution than chemical or chemical plus bacteria solutions. Biological inoculants also tend to have a more positive effect on both dry matter intakes and on animal performance than additives based solely on the use of food preservatives.

Use of an Additive should be an integral part of silage making whether grass, wholecrop or maize. Failure to do so simply increases costs and reduces output.

Treating Maize with a maize additive typically costs less than 5p per cow per day. If maize additive treatment results in an extra litre of milk per cow worth 25p, then the return on investment is better than 5:1. Looking at another way, if buying in additional maize silage costs £35 / tonne, a 3.5% saving in fermentation losses more than covers the cost of the maize additive treatment. Chances are you'll have less waste on the face, less heating in the TMR, a higher quality feed and a reduced level of mycotoxins in the diet as well.

Maize is an excellent feed for cows. However, the efficiency with which maize is digested by the cow on individual farms can vary a lot. Efficient rumen fermentation depends on firstly a good supply of fermentable energy of which maize has plenty, secondly a good supply of rumen degradable protein and thirdly a stable rumen pH to maximise microbial activity.

The amount of the TMR actually digested by the cow varies widely between farms depending on rumen pH, rumen stability and how well the diet is balanced. Undigested feed is wasted. Look out for undigested fibre or maize grains in the dung. Ensure that there is sufficient crude protein in the diet especially in late lactation. If necessary, include feed grade urea or high protein molasses in the diet as a source of ERDP.

Including a live yeast supplement such as Biocell and an effective rumen buffer such as Ostrea in the diet as standard, will help to maintain stable rumen conditions, increase DM intake, improve feed efficiency and animal performance. This alone will get more feed value from a crop of forage maize. 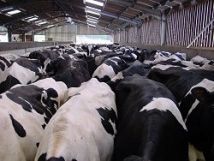 Biocell Yeast and Ostrea Buffer together cost less than adding 1.5kg chopped straw to the diet. Whereas adding excess straw to a diet can take up space in the rumen reducing intake of high quality maize and grass silages, Biocell and Ostrea generally increase silage intakes reducing the need for high levels of expensive purchased concentrates.

The aim here is to achieve a more complete digestion of the overall diet.
More Feed into the Milk Tank and Less Feed into the Slurry Pit.

High quality forage is the basis of all high yielding dairy diets. Investing a little more in inputs and in attention to detail can massively improve both the quality and the quantity of forage available. Well balanced diets together with a well balanced rumen can achieve much more from the feeds available for much less.

Richard Webster Nutrition Ltd offers a full nutritional support package free of charge to our customers along with the most extensive range of high quality feeds, seeds, supplements, additives and other inputs available

Contact Richard Webster for advice on making the most of maize