The Importance of Cows Rumen pH and Rumen Buffering

Dairy Cow Health and Feed Efficiency - Many of the problems with modern dairy cows are primarily triggered by, associated with or are directly caused by low rumen pH or acidosis.

Feed efficiency will be impaired when rumen pH levels fluctuate widely throughout the day or when rumen pH is below optimum even when the cows show no visual signs of sub acute rumen acidosis. Most dairy herds will have a proportion of cows with rumen pH below optimum at any one time, whether they are housed or at grass. They effective of rumen acidosis on milk output, cow health, longevity, feed costs and profitability represents a huge cost to the UK dairy indutry. For more information click here Rumen pH, Cow Health and Feed Efficiency.

Most cows at some point in their lactation suffer from acidosis

Traditionally rumen buffers have been used in the main where a specific acidosis problem has been identified, often as a short term measure. It has now become widely recognized that the inclusion of rumen buffers as standard in TMR's particularly in early lactation and high yielding dairy diets have a valuable and cost effective role to play. 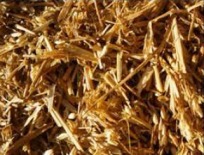 Chopped Straw - Whilst straw is not a rumen buffer it has been widely used to provide long scratch fibre and encourage cows to cud and to produce more saliva and saliva contains bicarbonate which acts as a buffer.

Sufficient long scratch fibre should always be included in the diet in order to maintain an adequate rumen mat. However straw alone will not cope with sudden increases in concentrates after calving, with excessively high concentrate feed rates, or with very high starch diets.

With very high D-value forages which have insufficient structural fibre to form a rumen mat and to encourage cudding , chopped straw fed at up to 1kg is very beneficial. Straw is only really effective if is cleanly chopped to between 2cm and 6cm to prevent sorting. Shredded straw is much less effective than cleanly chopped straw. Weathered straw stored outside should be avoided as it can be a source of mycotoxins. 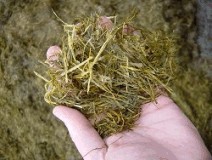 The reason for this is that low digestibility forages take longer to digest and are lower in energy value, consequently the rumen remains full for longer, dry matter intakes are lower and energy intakes are reduced. The cow under performs and loses body condition and is invariably then fed higher levels of starchier concentrates in order to maintain milk yields.

The resulting acidosis is due to the high concentrate to forage ratio rather than to a lack of structural fibre. Adding more indigestible straw simply further reduces intakes making the acidosis  even worse.

Ostrea Crushed Oyster Shell flour is a source of chalk derived from natural shell banks in the North Sea. The shells are dried and then ground to a powder. Sea-shell chalk is a rich source of calcium carbonate (96.1 %). The dry matter percentage is 99.5 %.

Ostrea Oyster Shell Flour is held in high regard by dairy farmers in Holland, Belgium and France who have used the product as a rumen buffer for many years.

We at RWN have extensive experience of feeding Ostrea on a large number of UK dairy farms over a number of years. Farmers regularly report responses and many now feed Ostrea year round finding it an extremely cost effective means of improving performance, body condition, feed efficiency and herd health. Optimal rumen pH and a well buffered rumen will also tend to support improved butterfat %.

Limestone Flour - Mistakenly ground limestone flour has often been recommended as a rumen buffer fed at 100gms - 200gms per cow on the grounds of price. Whilst limestone flour is an excellent source of calcium, well absorbed at the very low pH seen in the true stomach, it is in fact largely insoluble above about 5.5 pH. It is therefore totally unsuitable as a rumen buffer and should not be used as such.

Inappropriate use of ground limestone flour can also interfere with a range of other nutrients including phosphorous, zinc, copper, iodine, selenium and manganese resulting in trace element deficiency which has on occasions resulted in problems with lameness, high somatic cell counts and mastitis. When using any buffer, diets need to be checked by a competent nutritionist who can advise on mineral, trace element interactions.

Sodium Bicarbonate - Traditionally Sodium bicarbonate (NaHCO3) has been used to buffer dairy diets. However results have been mixed. It is only effective with very low rumen pH or for neutralising low pH silages. Having said that trials have shown that bicarb does not remove lactic acid from the rumen. Also sodium bicarbonate is highly soluble and is rapidly eliminated from the rumen. Consequently bicarb works for a very limited time and is unable to provide any long term stabilising effect.

Recent research work has demonstrated that sodium bicarbonate increases rumen outflow rates lifting dry matter intakes but reduces rumen fermentation efficiency. The result of this is that the diet is less well digested. Cows eat more, but milk yield responses are lower than when using slow release calcareous rumen buffers such as Acid Buf or Ostrea.

Acid Buf - Acid Buf is a natural product, derived from calcified seaweed with a very fine particle size.  Acid Buf provides calcium, magnesium and a range of important trace minerals. It is normally fed at 100gms - 125gms / cow and has proven effective in reducing the acid load of wet, low pH silages as well as in raising rumen pH. Some care is needed since Acid Buf has the potential to give very rapid and large pH rises beyond the optimum range for rumen pH.

Proprietary Rumen Buffers - There are a number of proprietary rumen buffers available in the UK, produced by various mineral manufacturers. These usually contain a combination of buffer and neutralizing ingredients such as sodium bicarbonate, sodium carbonate, ground limestone, magnesium oxide, calcified seaweed  and sometimes a token amount of yeast. These are designed to have a spread of ingredients which may buffer over a long time period however since they carry additional manufacturing costs are generally more costly than individual straight buffers. 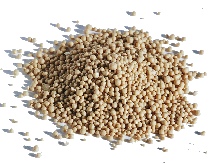 The combined cost of using a rumen buffer in addition to yeast as standard in dairy diets is less that of 0.5 litre of milk but the benefits are massive. Buffers are beneficial even at grass where the rumen can be as low as 5.4 pH. With this in mind there is good reason to include rumen buffers in all dairy diets.

Ostrea Oyster Shell Flour - Is in our view the most effective rumen buffer available in the UK. It has clear advantages over other buffers both in terms of efficacy and cost.

Ostrea Crushed Oyster Shell flour is a source of chalk derived from natural shell banks in the North Sea. The shells are dried and then ground to a powder. Sea-shell chalk is a rich source of calcium carbonate (96.1 %). The dry matter percentage is 99.5 %. Ostrea Oyster Shell Flour is held in high regard by dairy farmers in Holland, Belgium and France who have used the product as a rumen buffer for many years.

Ostrea Oyster Shell Flour - It is often claimed that Sodium Bicarbonate (NaHCO3) is better than Calcium Carbonate (CaCO3) for neutralising rumen acidosis. We consider this claim to be incorrect!

Unlike sodium bicarbonate, sodium carbonate and many proprietary rumen buffers Ostrea Oyster Shell Flour does not supply excess sodium, which at high levels can lead to excessive water intakes, softened hooves and damage to the cows kidneys. 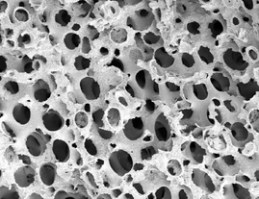 Ostrea contains similar levels of Calcium Carbonate to ground limestone. However ground limestone has poor availability above 5.5 pH and is therefore considered to be relatively ineffective as a rumen buffer. Ostrea is much more effective due to its high availability together with its large surface area and complex honeycomb matrix structure. Neutralising acids in the rumen is not the only benefit when feeding Ostrea. The calcium in Ostrea is highly available and fulfils the calcium requirements of the animal.

The calcium is absorbed by the animal over a period of time which contributes to overall animal health. In addition Ostrea contains a wide range of other highly available mineral and trace nutrients of benefit to the animal.

Digestion in the rumen is most efficient within a stable pH
range between 6.0 and 7.0 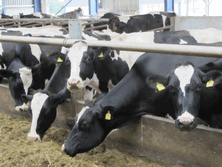 Ostrea has clear advantages over other rumen buffers commercially available to farmers in the UK. Many rumen buffers based on sodium bicarbonate, sodium carbonate or calcified seaweed, are capable of buffering the rumen pH to a level well above the optimum range for efficient fermentation.

These buffers can also result in very rapid pH rises within the rumen fluid resulting in an alkaline shock which can adversely affect the rumen microbial population and rumen fermentation rates.

Excessively high rumen pH value can reduce cudding and saliva production, and disrupt the whole rumen environment. Effective rumen function can rapidly decline to the detriment of production and health of the animals. 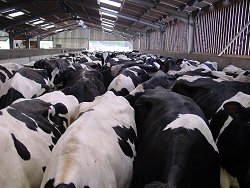 In practice Ostrea cannot over buffer the cows rumen. If the rumen pH is OK, Ostrea will not lift the pH further but will instead dissolve at the very low pH in the abomasum allowing the minerals and trace elements in Ostrea to be absorbed.

In our experience feeding Ostrea as standard in dairy diets has resulted in improvements in both herd health and in feed efficiency far in excess of the 3.5 - 5.0 pence per cow per day cost of the product. 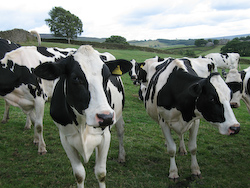 "Ostrea really did make a difference to my cows. Within 4 days the muck had improved and milk was up by more than a litre. After several weeks butterfats and milk yields were still improving and the cows were much more settled. A marvelous product and costs very little." Simon Taylor, Leicestershire 2012.