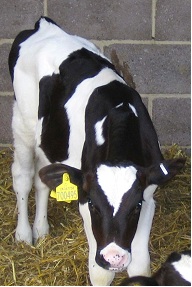 The choice of calf milk replacer will depend to some extent on the system used to feed the calves. Over the years a wide range of calf feeding systems have come and gone. Traditionally calves have been fed milk twice a day simply because it has fitted in with the twice daily routine of milking cows.

The majority of farmers feed milk twice a day or through an automatic computerised calf feeding machine. There has been growing concern over feeding pooled whole cows milk to replacement heifer calves for a variety of reasons. RIchard Webster Nutrition recommends using a high quality calf milk replacer in preference to pooled milk.

There has also been a move away from bucket feeding systems to teat feeding. Teat feeding should be used if at all possible to make use of the oesophageal groove reflex where milk bypasses the reticulorumen directly to the abomasum.

It is now strongly recommended that 4 litres of high quality colostrum is fed immediately after birth. Weaning should ideally not be before 8 weeks of age and only when calves are eating at least 1kg of dry concentrate feed. Which ever system is used calves should have available at all times, clean water, a high quality dry calf starter pellet or coarse mix, clean straw, dry beds and plenty of ventilation. 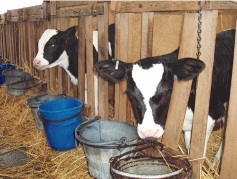 Twice a day bucket or teat feeding is probably the most widely used system of feeding. It is much more labour intensive than Once A Day feeding or Automatic Machine Feeding.

Whole milk is still produced on most dairy farms twice a day and it is usually more convenient to feed it than store it. Whole milk is not sufficiently concentrated to use alone for Once A Day feeding except on older calves whole milk cannot be used in most calf feeding machines. 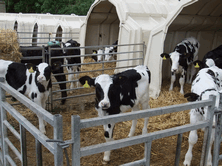 The old ad-lib Forster Technik Machines which fed large volumes of very dilute milk powder have largely disappeared from UK farms as have the cold ad-lib systems. Ad-lib machines were used to put a bloom on bull calves over 3-4 weeks prior to export to veal units in Europe. For heifer rearing the system had major disadvantages.

Calves could take over 50kg of calf powder to weaning. The large volumes of dilute milk also meant that calves were very prone to scour.

Dry feed intakes were very poor leading to severe checks after weaning. The calves consumed large volumes of liquid which invariably led to wet beds, high humidity and pneumonia. Often the system led to high mortality despite the over reliance on antibiotics. 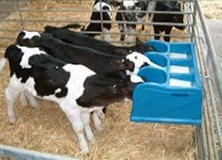 Once-a-Day feeding can deliver performance benefits over twice-a-day feeding for much less labour and less cost. In the past calves have been successfully fed milk once a day from 2 to 3 weeks old.

Unfortunalely UK law now dictates that all calves must be fed milk twice a day until they are capable of eating sufficient dry concentrate to meet their requirements. DEFRA deems this to be at 4 weeks of age.

Trials in Northern Ireland in 2012, comparing Once-a-Day milk feeding with Computerised Feeding of calves, resulted both in higher calf growth rates and lower feed costs worth over £50 per calf.

Once-a-Day milk can still be used from 4 weeks of age. To be successful it is essential to use a specialist high quality powder based on skim which will form a clot in the abomasum such as Elite. It is a legal requirement that all calves must be fed milk twice a day until they are capable of eating sufficient dry concentrate to meet their requirements and that all calves are checked and fed twice a day to six months of age.

The age that an individual calf is capable of consuming sufficient dry feed to constitute a feed and to be fed milk once a day without causing any animal welfare issues should be made on a case by case basis by the calf rearer. After this time milk can be fed in the morning as one feed with a second feed of dry concentrates in the evening. 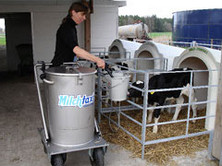 For Once A Day feeding feed calf milk replacer at 200gms made up to one litre with water or at 50gms -100gms made up to one litre with whole milk. Feed at 3 litres to supply 600gms of powder to 7 weeks of age. Then reduce by 0.5 litres per day to wean at 8 weeks. Alternatively the feed rate may be increased to 4 litres to feed 800gms of powder for weeks 6 and week 7. This additional level of milk powder has been shown to increase live weight by 15kgs which is still retained at bulling.

The use of whole cows milk for once-a-day feeding is problematic due to the high volumes, of around 5 - 6 litres required per feed to achieve the 600gms - 800gms of solids required for high performance heifer calves. Whole milk can however be used where a suitable skim based calf milk replacer is added in order to increase the solids. 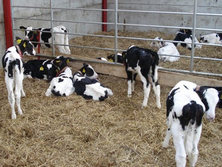 Automatic Calf Feeders have gained popularity for batch rearing beef calves and are appropriate on some dairy farms. Automatic feeders have the advantage of mixing and delivering warm milk to the calf several times a day according to a set programme. Whilst automatic feeders cost between £4000 and £10000 per unit they do offer savings in labour costs over conventional twice day bucket rearing and use less milk powder than ad-lib systems.

Automatic Calf Feeders May be the Best Choice in Certain Situations

RWN offers a full range of specialist calf milk replacers to suit all the various calf feeding machines currently in use in the UK.

For dairy farmers committed to producing high yielding, healthy heifers,
getting calves off to a good start is essential

For more information or for an in depth consultation contact Richard Webster.